My wife and I took a trip to New York City, to celebrate our 10 years of marriage. It was a trip of a lifetime, as we visited and saw historical sights & buildings, places we’ve only read or studied about.

One of our big goals in visiting New York was to visit some of the great churches of New York, and to observe and possibly learn a thing or two. I am a pastor, and it is very rare that we can visit another church on Sunday, due to our commitments & responsibilities. Therefore, while in New York, we visited 6 churches and 9 services, and took lots of notes on what we observed.

SOME NOTES FROM SEVERAL OF THE CHURCHES

We visited 3 campuses and 4 services of Redeemer Presbyterian, in hopes of hearing Timothy Keller speak live. (Hopefully, next time we visit New York, our hopes will be fulfilled.) Every service we visited was full of young adults, including the “classic” services. The same message & the same topic were preached in all the services, only by different people. There were no screens used; the lyrics of the songs were printed in the bulletins, and the bulletins were only passed out at the front of the altar. People came into church, went to the front altar area to get a bulletin, and during singing, opened the booklets for lyrics. Most of the singing, even in the “contemporary” service, was accompanied by a small orchestra & professional musicians, and one or two people singing in the microphone. The service was in many ways liturgical, with coordinated congregational responses to what the pastor read, confessions, and prayer. There were absolutely no screens used, and every campus was very bright. Redeemer Presbyterian offers three types of worship services: classic, jazz and contemporary. As already mentioned, we noticed a lot of people with an Asian/Korean background, and several of the pastors who spoke or made announcements on the stage were also of Asian background. 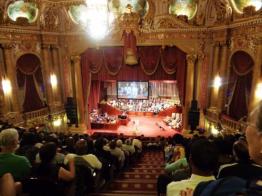 We visited the 3 pm “Bible Hour” service, and expected much less people, due to it being in the middle of the day. But to our surprise, we came in 40 minutes early and there were still hundreds of people at the altar in prayer from the 1 pm service, and Pastor Teresa and other pastors were leading that prayer. The 3 pm service was full. Pastor Carter did not preach in that service, yet, he was present, sitting on the stage, & participating in the service and listening to the message preached by one of the associate pastors. The congregation was very involved in the worship, which was led by one person singing from the microphone, accompanied by about 30-40 younger people in the “choir” area, also singing along. The singing lasted almost 1 hour, and though people were encouraged to sit through some of the songs, most of the people remained standing. The message was very good, and very practical. The audience was mostly middle aged, and over 80% African-American; I assume many of the younger people to be in attendance at the earlier services. The location of the church is so amazing; for such a life-giving church to be present at Times Square is God’s grace to New York and our nation.

We attended the 7:30 pm service at the campus that meets at the PlayStation Theater, which is right across the street from Times Square Church. We came 40 minutes early, and had to wait in line inside the building, until the doors were opened. The facility was full of young people, and initially, it seemed like every 3rd person was a volunteer in some capacity. Probably over 20 people said, “Welcome to church” to us before we finally made our way to some seats. The atmosphere was upbeat, and many people standing in line with us seemed to be visiting for the first time as well. The lights were dimmed, music was upbeat, and most of the young people there seemed thrilled to be there. The welcome center was referred to as the “Info Bar,” and drinks were passed out and referred to as “shots.” Worship was very loud and again, upbeat, and accompanied by a choir that was about 25 young people just standing around on the stage towards the back (no risers or steps), singing and actively participating in the worship. There were approximately 700 to 1,000 people present in the service. People who came with kids had a reserved section for them, which was probably less than 10% of the whole sanctuary. Most in the audience seemed to be very young, probably not married, and so those with children were given special attention and care. Many of the people speaking on the stage, including the campus pastor, had an Australian accent, except the main speaker that night, who was a guest, Pastor Frank Damazio. Pastor Frank mostly shared about his battle with cancer, and the response to the message was very strong. Over 100 people came to the altar to accept Christ as their savior. In his altar call, he openly referenced to homosexuality as sin, and proclaimed his belief in the ability of a homosexual person to change and overcome that sin.

We have read and heard a lot about the Tuesday evening prayers at Brooklyn Tabernacle, therefore, made plans accordingly to not miss this service. We came 1 hour early, afraid that we’d be standing and waiting outside until someone would open the facility. To our surprise, there were hundreds of people there already, some in fellowship, but most were just in their seats or at the altar praying, while quiet music was playing in the background. The sanctuary began to quickly fill up, and by the time the service started, I’m not sure there were any seats available in the whole sanctuary, which seats over 3,000 people. At 6:30 pm, one of the pastors got up on the stage, and announced that there will be pastors up at the altar, available to pray with people. Quickly, a line formed from the front to the very back of the sanctuary, as 19 pastors stood across at the altar, and took time to meet with and pray for each individual. At 7:00 pm, 4 people came to the front, and began to lead the congregation in corporate singing. Everyone in the congregation was singing, many hands raised, it was surreal. After a couple of songs, the pastor leading the prayer service led the congregation through several prayers; each time, he would describe the prayer need, and invite another pastor to pray for the need in the microphone, while the congregation prayed out loud; for the most part, the pastor praying was barely heard due to the volume of the congregational prayer. Then, people were invited to sit and watch an announcement video. During the video, everyone received a card with a printed prayer request on the card, which was submitted by either someone at the church or online to Brooklyn Tabernacle. People were invited to get into groups of 2 or 3 people, to read the requests to each other, and to pray in groups for those needs. After that, one of the associate pastors of BT spoke a 18-20 minute message, and invited the congregation back into prayer and congregational singing, as well as invited those who wanted to be prayed for to the altar to come forward. Again, many people made their way forward. The whole prayer service lasted about 1 hour and 40 minutes. The people present at the prayer service were very diverse, with many age groups represented, as well as many ethnicities and nationalities. Im still in awe of what we experienced that Tuesday evening. In my travels, I’ve been to many parts of the world including Korea; I’ve heard Koreans pray long and hard, but Tuesday evening at Brooklyn Tabernacle was nothing like I’ve ever seen. And for the most part that evening, I spent a lot of time repenting for ever even allowing a thought to slip through that “Slavics” know how to pray; we’ve got a long way to go! If you ever visit New York, PLEASE set aside Tuesday evening to visit Brooklyn Tabernacle.