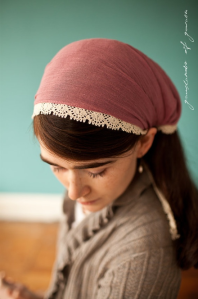 Pastor Aleksey Kolimiytsev wrote a blog on whether it is necessary for a woman to wear a head covering or a veil, while praying. I definitely think its worth your time, reading it. Here it is.

How do we interpret 1 Corinthians 11:1-16? Does this scripture indicate that Christians must wear a head covering at all times?

The issue of head coverings and veils often leads to debates and arguments. This happens because people elevate something into the realm of dogma that which for some reason God did not consider important enough to explain in His Word, the Bible. The issue of head coverings is only mentioned once in the New Testament, in 1 Corinthians 11:3-16. Jesus Christ did not say anything concerning this issue, nor did Peter, James, and John mention anything in their letters. The problem becomes even more significant, because the only time that Apostle Paul does mention a head covering, his main theme is not elements of clothing, but the roles and authority in the structure of a family. The covering of the head, in this scripture by Paul, is more of an illustration of the principle of a wife’s submissiveness to her husband. Not a doctrinal teaching for the head covering.

This is mostly why Paul does not present a detailed teaching concerning this issue. Furthermore, speaking of a head covering, he uses several arguments that were easy to understand for the Corinthians, but harder to understand for those who are unfamiliar with that culture. While studying similar scriptures, a reader is always faced with a certain complexity, requiring special care and attention to not miss that which is God’s commandment, and at the same time not to elevate something into the rank of doctrine, that which is not.

First of all, it is important to notice that with all the intricacy of this text, the main theme is absolutely clear and easily understood to the modern reader. Paul states it in the very beginning with the following words, “But I want you to know that the head of every man is Christ, the head of woman is man, and the head of Christ is God.” (1 Cor. 11:3). This principle is the main thesis in this section of scripture. It was very important for Paul to set in place of a Corinthian believer an unchangeable principle of responsibility and authority inside the family, and not to allow for roles set in place by God to be mixed with the cultural roles. Therefore, he confirms it directly. This principle concerning authority is also confirmed in other epistles and in the Gospels.

Therefore, the leadership of a man at home – is without doubt and debate, the main theme of this text, as considered by most scholars. The problem starts when Paul transitions to use his illustration as to explain his main thesis. To show that men and women are created differently and to make his point clear and convincing for believers in Corinth, the apostle shows them a visual illustration. He highlights the fact that the different roles of men and women are natural, and are also visible in the outside appearance. Paul uses the known fact, that in Corinth, praying men did not cover their head, while women did (11:4-7). When either of them disobeyed one of these orders, it was a dishonor to them. The apostle demonstrates that men and women cannot be the same for they are created different, and it is also evident in the social structure of a community.

After having mentioned head coverings in verses 4-7, Paul again goes back to his main thesis, bringing up another argument why a wife is to be submissive to a husband, “For man did not come from woman, but woman from man; neither was man created for woman, but woman for man.” (11:8-9). Furthermore in verses 11-12, Paul brings balance to this issue, saying that even though men and women have different roles, they have equal value in the eyes of God. At the end of this text in verse 13, Paul again goes back to his head covering illustration, but from a different viewpoint.

As it was already said, most people studying this text do not have doubts about the main thesis of this section of scripture. They agree that men and women are different, and that they play different roles in the family and community. Debate rises when Paul uses his illustration. Can you, and should you see in this illustration a Biblical standard, making the head covering a must for all women, at all times? To answer this question, one must study the full text and meaning of what this illustration is saying. And it is here, where several complexities arise.

Verses 4-7 explicitly deal with the cultural characteristics of Corinth, where Paul speaks of “glory” and “shame.” It appears that for a Corinthian woman to cut her hair, she associated herself with a class of women who set themselves on the same level as men. Paul refers to this fact, as to what was clear and easily understood by his readers. He speaks without special explanation knowing that his readers knew very well what he was referring to.

The first complexity is in verse 10. The original text does not have some of the words that the Russian synodal version has, making it harder to understand. In the Russian translation, it is written like this, “Therefore, a wife must have on her head her sign of authority over her for angels. The words, “her sign” and “over her” are cursive, which means that these words do not exist in the original. If you omit the non-existent words, then that verse will say something like this, “Therefore a wife must have on her head authority for angels.” What it means to have authority on one’s head is difficult to understand. Therefore, being in a difficult situation, the translators added the word “sign.” They picked a word that in their opinion suited the text best, to make the phrase understandable. The phrase definitely gained a meaning, but we cannot guarantee that it was the meaning set by God, because we are not dealing with God’s words, but with something that was added by people, in other words, the interpretation of the translator. This means that this verse cannot be our only foundation for formation of a doctrine. For a doctrine to be formed, you need the confirmation of other, clear texts.

Furthermore, if one uses this translation with the added words, it is hard to understand how a veil can be a sign for angels and why it is necessary for angels. The history of the interpretation of this scripture has known dozens of attempts to explain how the veil can be a sign for angels, but not one of those explanations have a strong, compelling reason. All of them are based on subjective, not provable assumptions.

The above-mentioned difficulties make it very difficult to have an exact interpretation of the text relating to the covering of the head. Therefore, to use this text as a basis for a dogma, it is necessary to ensure that this doctrine is confirmed with other places of the Bible.

As already mentioned above, except for 1 Corinthians 11:3-16, the necessity of head covering is not included as a dogma of faith in all of New Testament. When the apostle speaks of the appearance of women (1 Peter 3:2-6 and 1 Timothy 2:9-10) where it would be appropriate to speak about the need to cover their heads, the authors are both silent about it. In addition, both of these texts warn Christian women that they are to not be fond of lush hairstyles (braided hair).  The problem of braided hair could have been solved by simply pointing out to women that they need to cover their heads (speaking of veils of that time, they were so large that they completely covered a woman’s head and shoulders). Nevertheless, the apostles did not mention head coverings.

Due to the fact that the text itself is not clear and indisputable and the idea was not confirmed by other passages of Scripture, we must recognize that it can not be a reason to consider the need to cover the head as authoritative Bible teaching.

In addition, as already noted, the question of head coverings is reflected not in the main idea of the text, but as an illustrations of the basic idea. Illustrations, parables, examples, and even the practice of believers referred to in the Bible can not be equated with the doctrine, if the topic does not have a direct teaching elsewhere. For example, in the first church in Jerusalem, the Christians sold all their possessions and had all things common (Acts4:32-34). Nevertheless, the practice of the early church is not a Biblical doctrine or dogma, because it is not confirmed in the messages and is not presented as a doctrine.

From this, we can conclude: 1 Corinthians 11:3-16 contains clear teaching of the hierarchy of the family unit, but it can not serve as a basis for the formation of the dogma of the head covering. This text has a different goal to teach. In it, the apostle Paul draws attention to the danger of feminization penetrating into the church from the surrounding society. Emphasizing the equal value of men and women before God, Scripture always sharply condemned any form of mixing or blurring of lines between the different roles defined by God separately for men and women. Apparently, those who advocated the equality of the roles of women and men in Corinth expressed their objection by taking off their head covering, emphasizing their rights. As the culture changes, so does the way we express our acceptance or protest of God’s standards and the role we are to play. Therefore, is not so important whether a woman wears a scarf today or not. But rather, does she agree in her heart to the role for which God created her? Is she happy with her role? Or does she protest and rebel against it?

2 thoughts on “Is it mandatory that Christian women should wear head coverings or veils?”