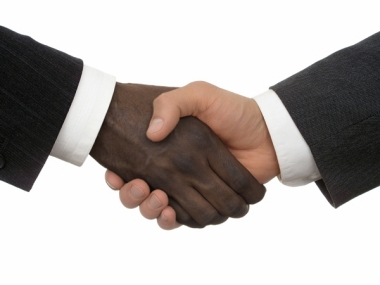 I am of Ukrainian descent and in the Slavic circles, because the culture is not very diverse with different races, the question that is often asked is “where do black people come from?”

Sadly, many preachers have tried to answer this questions using the Bible and have been completely off. Here are the 2 answers I heard growing up:

1. Black people are descendants from Cain, based on Genesis 4:15

And the LORD put a mark on Cain, lest any who found him should attack him. ESV

After Cain has sinned, Cain was afraid someone was going to kill him, therefore, God put a mark on Cain. Some claim that mark is the darker skin color.

There are several major reasons why this theory is completely wrong, but I’ll just name one obvious one: several generations after Cain, there was a worldwide flood that killed every person on the earth, except Noah, his wife, their 3 sons, in total 8 people. If Cain’s curse was that he and his descendants became dark in skin color, they would have died off in the flood.

2. Black people are the descendants of Ham, the son whom Noah cursed.

Genesis 9:24-25 “When Noah awoke from his wine and knew what his youngest son had done to him, he said “Cursed be Canaan; a servant of servants shall he be to his brothers.” ESV

My question to that argument – why is the curse of Ham necessarily result in a black skin color? What if that curse led to the “white” race? The curse of Ham had nothing to do with skin color.

Because racism was and is so prevalent in many cultures, even preachers tried to find a way to describe the “black/African American” race as coming from a curse. Therefore, when some preachers realized they cant use the curse of Cain because of the flood, they focused their teaching on the curse of Ham. What a shame.

If being black/African American, white, Asian, Latino or any other race or color of skin was a curse, 2,000 years ago Jesus died on the cross. And in the cross, we have the forgiveness of sins and cancellation of curse. Therefore, if being a specific race or color of skin is a curse, after accepting Jesus and repenting, wouldn’t our skin color change? Because no skin color change occurs when one accepts Jesus, the idea of a different skin color being a curse needs to be completely and forever forgotten.

One painful historical memory in the United States is when some early settlers to the United States explained Native American’s darker skin color as a curse. And when some of the Native Americans believed in Jesus, the early settlers spent hours washing them, often using force to try to wash off the darker skin. Some even believed that they succeeded, and took those “newly converts” and drove them around churches as a witness, that because he/she believed in Jesus, his or her skin color was now turning whiter.

If you are one of the preachers who tries to explain the Africa-American race as a curse, I’ve got some thing to say to you:

Personally, it hurts my heart to see the church often being on the fore-front of promoting racism.

God is the creator of all human beings. No race is a result of a curse. God created us differently. He loves different races equally. God does not like to create similar things; just look at snowflakes or fingerprints – not one is the same.

My challenge to our Ukrainian and Russian brothers and sisters – next time you hear a preacher refer to an African-American race as a result of a curse – refer them to the Bible and to my blog. In both places, their arguments will fall flat! Confront them. It is long-overdo for this rhetoric to stop.

One thought on “Where do black people come from?”