To the Russian/Ukrainian/Slavic Christians living in the Puget Sound, the Washington State Criminal Justice Center in Burien is a very familiar facility. Over the years, the facility had been rented by numerous churches and para-organizations for events. What most Slavics didn’t know is the sad history of that facility.

I believe the facility’s history can teach us all some valuable lessons.

Community Chapel and Bible Training Center was an independent, “oneness Pentecostal” church started in 1967 by Pastor Donald Lee Barnett. It started in his home, and continued to grow to over 3,000 people with a Bible school, and over 150 active ministries. Within time, they purchased 36 acres, constructed a chapel, an elementary school, a printing press, a recording studio, a Bible school, and other facilities. But with time, everything fell apart and was boarded up, and eventually sold. The facility became what we know it today as the Washington State Criminal Justice Center in Burien. 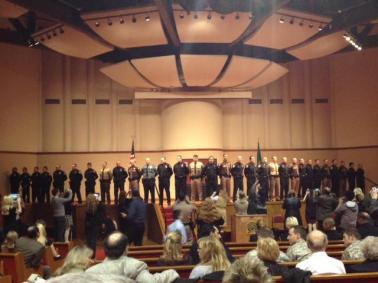 What happened? Why did it fall apart?

The Rev. David Wilkerson referred to what happened at Community Chapel as “the most grievous thing I’ve ever heard in my 30 years of ministry, and the worst error that’s ever come into the charismatic movement.”

Here is some info of what began to take place, from Wikipedia, and other sources. Please note, this content is for a mature audience only:

In 1983, Barnett told his congregation that he was taken “in Spirit” to heaven, where he sang with angels and experienced “oneness of being” with Christ. Following this, he instituted “dancing before the Lord,” which was a free-form, individual dance with spiritual implications. In 1985, however, this evolved into a highly controversial, intimate two-person dancing practice known as “spiritual connections.”

During church services, members were instructed to find a dance partner, known as a “connection.” By staring into each other’s eyes, a process known as connecting, partners were told they would in actuality be seeing Jesus in each other’s eyes, and were encouraged to look with love into their spiritual connection’s eyes in order to express their love to Jesus. Throughout the week, both in and out of church, members were encouraged to spend time with their spiritual connections in a kind of “quasi-dating relationship.” Physical intimacy often accompanied these “spiritual” connections, and connection love was taught to be more intense, and more desirable, than marital love.  A former member has stated that the connecting experience was so intense that she and other women would experience orgasms without ever having any physical contact with their connections.

It was taught that God was using the “spiritual connections” to break down the barriers and inhibitions within the congregation, and promote greater “unity” within the church. Spouses that felt jealousy watching were taught to “release their mates unto the Lord,” and Pastor Barnett taught from the pulpit that members were not to view the connections “carnally.” According to Barnett, what the people were doing (which included hugging, holding, fondling, kissing) was not to be viewed with the eyes of the “flesh.” As he explained, “What’s happening is they’re having spiritual union … It just looks the same on the outside, but what’s really occurring is spiritual, so don’t judge them or their motives.” In the book Churches That Abuse, a former member described what it was like at church services that included such sessions of dancing:

Picture your typical forty-year-old wife who’s out of shape and has six children. There she is watching her husband dancing with this little twenty, year-old , long blonde hair, in his arms, gazing at her for hours. And meanwhile the wife is going insane.

The practice often led to marital friction. The members were told that intimate spiritual experiences with their “spiritual connection” (typically a member of the opposite sex to whom one was not married) could help defeat the “demons of jealousy” and open up the person to a deepened experience of the love of Christ. Critics have attributed spiritual connections to “scores of divorces and separations as well as suicides and the murder of a young girl by her mother.” The practice of spiritual dancing has been highly criticized in newspapers and books, and by former members and researchers.

More on the “Spiritual Connections” from a different source:

Connections originated as a practice, not as the discovery of a doctrine contained in the revelation given to us in the Scriptures (which is the only true kind of revelation). Others with more knowledge about the following events may correct me, and I would invite that, but my understanding is that connections first were practiced in the Kansas satellite church of the Chapel in early 1985 during the move of God we (at first) called “dancing in the spirit”. That move had started in the fall of 1983 at a retreat for the teachers of the Community Chapel Christian school (at which I happened to be present, by the way, because my wife was a teacher there). At first the “move” of dancing was limited to solo dancing, except perhaps for occasional times of dancing in a circle around someone who was being “ministered to.” The aisles and front areas of the Chapel sanctuary filled with people during and after every service with many people dancing individually. Soon couples found themselves dancing together, “worshipping God.”

Then, ironically, in a little outreach church out on the dusty plains of Kansas the exotic hothouse shoot of connections poked through the soil: the eyes of a man and a woman who were “worshipping” (i.e., dancing) together met, and they each felt that a powerful spiritual bond had formed between them and that previously unmet needs were being met in a deep way, maybe even that they were each seeing Jesus in the eyes of the other. Soon this shoot was transplanted to the moister soil of the Seattle church and it began to be formally taught that this was a new way in which Jesus was visiting his church and perfecting love in it. It also began to be taught that we needed to get rid of “legalistic” ideas about marriage so that our spouses would be free to take part in this “move,” because of course, connections were seldom between husband and wife. It was taught that too many hurts had been built up over the years of a marriage for this to be possible. Instead, we must have these hurts healed in a connection, and then return to the marriage to make it even stronger with the love we had received in the connection.

And all along this was supported much more by prophecies, and by tongues and interpretations much more than it was by the teaching of the Scriptures.

There are many other things that happened at the church, between board members and the pastor, and Ive only scratched the surface. Many other questionable teachings were also taught and enforced. Celebrating Christmas and Easter was discouraged because Barnett considered them secular holidays. Engagements could not be announced until Barbara, the pastor’s wife, was informed. Every indication of a negative or “rebellious” attitude or unapproved opinion was attributed to demons.

The ending was sad. The church fell apart. Most of Community Chapel’s congregation had scattered, some seeking refuge in their homes, in new churches, or in their resolve not to be duped again. They are battered emotionally and spiritually. They find it difficult to trust others, to submit to leaders, to expose themselves to the world as people who once supported Community Chapel.

Here are some lessons for us today, as we look back at what was Community Chapel and Bible Training Center.

Here are some additional Newspaper articles, about the church:

Here are 2 of the sources I used for above article: